FlightCaster has an algorithm that is used to predict flights. Currently the only method of determining the accuracy of the predictions is the historical set of data that the algorithm is trained on. This is fine, but it would be interesting to see how the algorithm performs on flights of which the outcome is unknown (how it perform in the real world).

Extracting Data from the Production System

In order to test the predictions a data-set must be build from the production system that is use. Going back in history and collecting the prediction on flights that have already been completed is a huge undertaking and wouldn't result in the actual data that is necessary to provide the wanted information. The goal is to track how the algorithm performs in real-time, not on the past. This will also allow another method of analysis to confirm the accuracy of the algorithm, and the improvement of the production system over time.

Every hour predictions are gathered about every flight in the system within 27 hours of departure and 3 hours after landing. The flight and prediction data is then stored. One downside is that the flight information is not gathered at specific intervals to the takeoff time of the flight. Although this does present how the data is access by a real user, so it may in fact be a better way of collecting the data. So instead of predicting how good the predictions are at a specific time t before the departure ranges need to be looked at.

The direct output of one view of the whole system is a file that contains the information about every flight and its predictions for a specific hour. So there are many flights represented in each of these outputs. The output files are then stored on S3 for later analysis.

Understanding the Metrics to be Extracted

The end result of all the analysis to be performed is a 3 dimensional matrix that is 3 × 3 × 24 in size. The analysis will report the accuracy of the predictions in hour intervals up to 24 hours prior to completion of the flight. So instead this can be thought of as 24 3 × 3 matrices with each of the 24 representing a specific hour.

The columns present the actual data and the rows the predictions. The 1st column and row stand for on-time. If a flight is actually on-time and FlightCaster predicted that it would be on-time, the value in this position is incremented. Similarly the second column and row stands for minor delays and the third column and row for major delays.

Another example for clarification: If a flight was predicted to be on-time 1 hour before departure but the flight actually experienced a major delay, the value in the 1st row and 3rd column of the 2nd graph would be incremented. 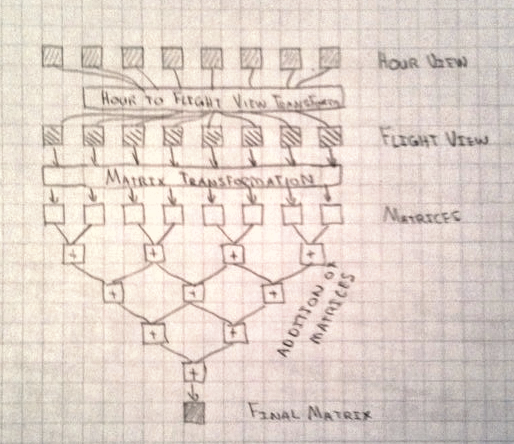 The input (what is captured from the production system) is a view that presents all flights within that hour. This is a fine method to capture the data, but the preferred view of doing the analysis would present the a single flight and give a snapshot of the flight information and prediction at hour intervals until the flight is completed. This step is not necessary, however, it makes the following analysis easier to perform. So the first task in analyzing the data is to transform it from what I will call the hour based view to the flight based view. Both views contain the same information, just in a different form.

After the initial transformation each of the flights, represented in a flight based view, will be converted to the matrix describe in Understanding the Metrics to be Extracted.

The next and final step before presented the data is to combine each of matrices until one matrix is left.

After this point a simple GUI interface will be made for the business folk to understand.

Beside the basic information, it would be nice to know the mean, mode, average, and standard deviation of the values given in the matrix.

And now for the implementation…